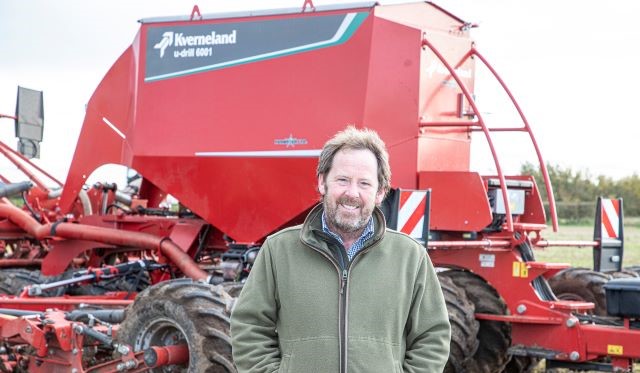 Looking for more productivity with cultivations and drilling, Yorkshire grower Julian Floyd opted for a 6m u-drill in the Spring of 2020. It followed a demo from local dealer Farmstar, from which he has never looked back.

“With soils ranging from heavy clay to sand, we have a lot of variability, and while we’ll always have a need for a plough, we needed the option to work differently,” he says.

“Land is in four blocks, spread over a 20-mile radius, which poses a logistical challenge. By opting for the u-drill, I’ve got the convenience of a wide machine that’s also easy to move around,” he says. “It has increased my output enormously and that’s helped to improve timeliness too.”

“The u-drill has also done a top job of firming the surface, thanks to all its press wheels,” he adds. “It rides superbly, and is very easy to pull. As a result of a consistent seeding depth, we’ve seen very even crop emergence from the u-drill.”

He says that in 2020’s wet autumn, the ability to plough then drill, compared to plough and power harrow/drill with his old 4m unit, has also meant more productivity at a lower cost of establishment.

“Conservation tillage won’t work everywhere on our farm, particularly when rotation and soil types are taken into consideration,” he says. “Though the u-drill has now given me the option of working on ploughing, into min-till, and I’ve also experimented putting cover crops straight into stubbles with it. It’s very impressive.”

Read more about the Kverneland u-drill