CTS Evo does what it says on the tin!

For R&R Farms at Stainton by Langworth, Lincs, the CTS stubble finisher has more than earned its keep.

Fitted with a Biodrill and in its primary role as a one-pass rape establishment system behind a Case Quadtrac STX535, it has been instrumental in improving soil structure, alleviating compaction and creating level seedbeds across the farm.

And after five years of use, the original 4.5m model was replaced during the Autumn of 2011 for the latest CTS Evo-specification.

“It is a very impressive cultivator, and once set correctly, needs no further tweaking on our soils,” says operator Neil Maddison. “It will keep going, regardless of weather conditions and the Cracker Packer never blocks.”

Where the previous model repeatedly cultivated every one of the 3,500 acres farmed by R&R Farms – plus some local contract work for rape establishment - the CTS Evo will be used in a much more flexible approach, allowing rotational ploughing to be introduced for grass weed control.

“The new version is a much more refined machine,” he says. “The front discs make a better job of rape stubbles, there are more tines to do the work and with wheels on the front corners, it does a far better job at levelling the seedbed.”

Mr Maddison says that the farm couldn’t fault the previous model for the way it conditioned and loosened soil, adding that the latest Evo version has taken that concept a step further.

“If I set the front end at 10cm depth and the rear at 30cm, then that’s exactly what I get,” he says. “It leaves no soil untouched.”

On heavy clay soils, he says the machine needs every bit of available horsepower from the STX535, but on lighter ground, there’s an opportunity to throttle back and save fuel while maintaining a consistent 10-12kph.

“There is no doubt our soil structure has improved since switching to the CTS,” he says. “And we have dramatically cut our establishment costs without affecting yields.” 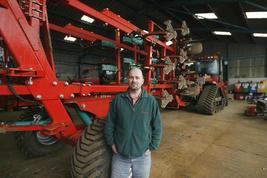 Neil Maddison says there is no doubt that soil structure has improved across R&R Farms since switching to the CTS five years ago.

R&R Farms is planning a world record attempt this summer to get the largest number of quadftracs working in one field. It’s called the John Rainthorpe Quadtrac World Record, in aid of Relay for Life. Take a look here for more details: