“The plough has proved to be the one piece of equipment that is guaranteed to give me a seedbed and get my crops off to a strong start,” explains Essex grower James Mugleston based at Hammonds Farm, Stapleford Tawny, near Romford. “We need a tilth, so our land needs moving, opening up and aerating.”

By his own admission, James is not a ploughman and does not enjoy ploughing. So the prospect of ploughing 550 acres every autumn was a task he wasn’t particularly looking forward to. But technology came to the rescue, thanks to the Kverneland i-Plough’s capabilities.

“This is just so easy to use,” he says. “With on-the-move adjustments done through the Tellus GO in-cab terminal, and GPS to manage furrow widths and maintain arrow-straight furrows, I have time to watch what’s going on.”

Supplied by local dealer Tuckwells, the i-Plough follows an A-B line, adjusting its furrow widths on-the-move with the help of an RTK signal, to maintain an arrow-straight finish. Handled by an MF 7726S, output is around 45 acres/day.

“Ploughing done badly would be worse than not ploughing at all,” he says. “Fortunately, the technology has helped me to learn and understand ploughing much more quickly than spending years in the seat. And the results speak for themselves.” 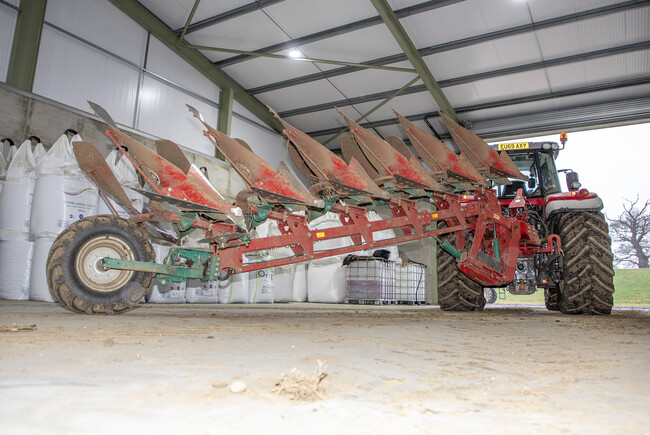 With all straw chopped and incorporated, the resulting clean and level finish is easily managed by in one pass with a Cultipress, with its DD rings setting up a weather-proof tilth ahead of drilling.

“I’ve never known a plough to pull so effortlessly,” he says. “It’s also a very simple, and well-designed bit of kit. Skimmers are a doddle to adjust; every grease point can be reached from the transport position; and with knock-on points, I can swap metal or change them in the field, in a matter of minutes. It’s no longer a traumatic experience.”

With some fields accessed using public roads, James says the plough’s folding headstock and pivoting cross-shaft have made on-road transport safe and secure.

“It tows just like a trailer,” he says. “And that’s important with what would have been a long, over-hanging fully-mounted implement.”

“Demands on my time are challenging, though farming is the one aspect that can’t wait,” he says. “So I have to be efficient with my time and farm to the best of my abilities – and the i-Plough helps me to achieve those goals.”

“Despite 2020 being a tough Autumn, this time all my fields are planted and my crops are looking well – we wouldn’t have achieved it without this plough,” he adds.

Read more about the Kverneland 2500 i-plough