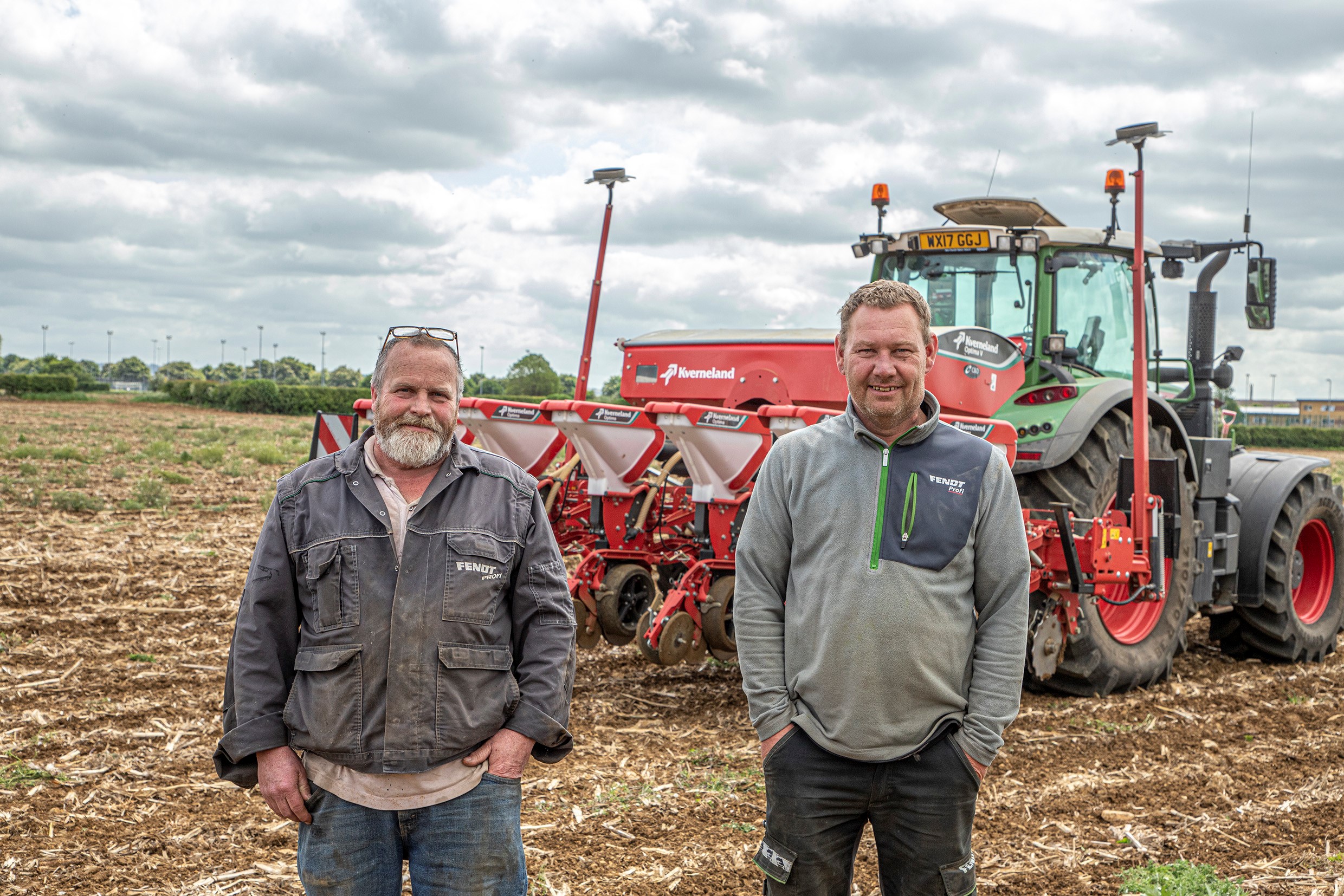 Looking to reduce the cost of producing grain maize, Andy Longman of Snagg Farm near Shepton Mallet, Somerset, has opted for a Kultistrip to develop strip tillage practices for the high value forage crop.

It followed a demonstration in 2021, where a six-row Kultistrip was put to work, preparing ground ahead of a contractor’s eight-row maize drill.

“It was very much trial and error, but we liked what we saw,” explains Andy, pictured below left. “So we bought the Kultistrip and a six-row Optima V from C&O Tractors, to precisely match-up with the cultivated strips. This season’s crop has gone in extremely well, saving time, fuel and establishment cost.”

He says that of last year’s crop, those fields that were strip-tilled yielded 0.7t/acre more than the conventionally grown crop.

“We weigh every load that comes off the combine,” he says. “I’m sure the yield difference came from the Kultistrip keeping moisture in the seedbed, compared to higher moisture loss from traditional seedbed preparation.”

He says that weed incidence was reduced and has eliminated the need for a pre-emergence spray, enabling any weeds to be knocked out with a post-emergence application.

“We’ll still need to plough periodically, but rotationally rather than as an essential part of maize establishment,” says Andy. “This way, we can make the most of soil biology and micro-organisms.”

He says that taking control of the strip-tillage and drilling processes has created better timeliness, and the opportunity to experiment with pre-drilling cultivations. With the Kultistrip, the surface is stripped clean ahead of soil being loosened across a narrow 150mm strip, courtesy of front cutting discs, a loosening tine and side discs, before being crumbled and firmed by Farmflex rubber press wheels.

“We’ve done a lot more preparation for this year’s crop by switching to two passes,” he says. “The first was at 6in to set the ground up, then a deeper pass followed a few weeks later at 9in, ahead of drilling.”

“If we can get a front tank sorted, we’ll put fertiliser into the strips instead of broadcasting on top of the seedbed, to increase plant uptake,” he adds. “We’re looking for 1,000 tonnes of grain off 180 acres, using three varieties.”

“The Kultistrip is an impressive piece of kit, and then the Optima V just raises the bar another notch,” he says. “Seed placement accuracy – both depth and down-the-row-spacing – is amazing. And with RTK guidance, we can match up the six rows perfectly.”

Chris says the range of adjustment on both the Kultistrip and Optima V provide enough scope for the soil types and field conditions encountered.

“Sowing depth is as good as guaranteed, no matter what the conditions,” he says. “And without overlaps from electric drive and section control, we’re using less seed. Seed counts are typically 40,000 per acre, and we’re looking to cut back to around 37,000.”

“We bought beet discs too, which brings additional versatility from investing in the drill,” he adds.

Andy Longman is pleased with the changes made to maize establishment at Snagg Farm.

“We’ve just completed 65 acres of maize with one operator and tractor, in just three days and that includes the time spent making two passes with the Kultistrip,” he says. “Our Fendt 724 is burning just five litres/acre with the Kultistrip, and 2-3 litres/acre when drilling, which means our diesel use is close to 25% of what we’d normally use for seedbed production.”

He says the key to its success lies in effective cultivation of the area to be occupied by the rows of maize.

“Why should we continue to move all the soil when maize is grown in 75cm row spacings?” he asks. “This is where strip tillage makes so much more sense. The untouched ground helps to carry the weight of machinery, which limits compaction. And not moving so much soil helps to discourage weed germination.”

“With an increase in the cost of diesel this year, and a higher grain price, the Kultistrip should pay for itself in little over 200 acres,” he adds.