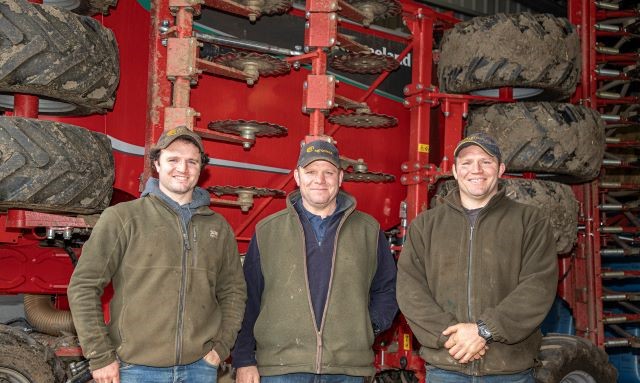 After five years of running a 6m u-drill, David Atkinson and Sons, of Hawkhouse Green Farm near Doncaster, has put the new MD disc version to the test for autumn crop establishment.

“There’s no doubt about it, this low disturbance approach has helped to reduce our establishment costs,” says Pete Atkinson, who runs the farm with his dad David, and brother, Ben (pictured).

“We’ve been able to remove a pass with a cultivator, and this has ensured we continue to produce cereal crops profitably.”

The 1,400-acre operation has a mix of soil types from limestone through to heavy clay, and most of it dictates that the farm would be foolish to attempt a move straight into no-till.

“As a low disturbance drill, the 6m u-drill with MD disc is the solution we need,” he adds.

Where the Atkinsons would have previously moved ground with a 3.6m Quadtill cultivator, the switch to a 6m Kverneland Turbo has increased output considerably. Both would be pulled by the farm’s Quadtrac STX435, and there’s been a noticeable drop in fuel consumption.

“We’ve gone from 90 litres/hr to just 40 litres/hour,” he says. “And a level, stale seedbed is then very easy to drill into, with the MD disc.”

Pete says the farm has tried a variety of scenarios ahead of the drill, including leaving the following harrow off the ground too. And where his old u-drill would burn 32-33 litres/hr working on cultivated land, the MD disc version has seen fuel burn drop to 28 litres.

“Where we’ve experimented putting cover crops direct into stubbles, fuel consumption has dropped to 19-21 litres,” he says. “Though it’s not what the drill has been designed to do.”

Pete says the MD disc is very different to how his original u-drill is configured.

“Where the old drill would work deeper and move far more soil, the MD disc simply moves trash and leaves a clean surface in a narrow strip ahead of the CX coulters,” he says. “We can create a really good stale seedbed in two passes, though the target is to achieve that with just one pass.”

He says that working much shallower now means that if the weather does turn bad, the ground won’t saturate and the farm will still be able to make progress.

“Harvest was late in 2020, which had a knock-on effect with autumn cultivations and drilling,” says Pete. “If we hadn’t had the MD disc, we would not have finished our autumn drilling. And we’ve been very impressed with everything the drill has done so far. All our crops have emerged evenly, and the look well.”

What is the MD disc?

The MD disc is an alternative cultivation disc to the u-drill’s short disc harrow. Previously known as the Great Plains Turbo Coulter, the MD disc has been developed to minimise soil disturbance. It is well-suited to cover crop establishment; it can be used as part of a conservation tillage system; or within a conventional crop establishment process. The 430mm diameter straight disc has a fluted profile around its circumference, which assists with removing surface trash, reducing the risk of hair-pinning. The disc’s flutes also lightly prepare soil in a narrow 30-50mm strip. Each disc also aligns perfectly with the u-drill’s CD coulters, enabling seed to be placed in the soil strip, delivering a row spacing of 16.67cm. Each MD disc is individually mounted using the proven 3D auto-reset rubber-mounting system, allowing it to follow ground contours, but also to deflect on-contact with any in-field obstructions.