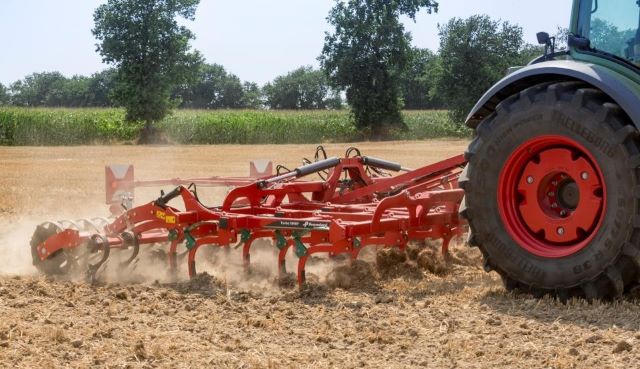 A change in cropping and cultivations policy for one Lincolnshire grower has seen ploughs and power harrows replaced by a 4m Turbo folding cultivator.

“A change to our rotation has meant the only crop that we believe now needs heavy cultivations, is maize, that we grow for grain,” explains Mark Gash, who runs a 1,300-acre farming and contracting business with his Dad, Trevor Gash (pictured). “Everything else we produce has gradually shifted towards min-till and zero-till processes.”

The family run operation, based at Glebe Farm on Blankney Fen, near Woodhall Spa, is one that was once heavily reliant on ploughing and power harrowing. But that requirement is now comfortably filled by the Turbo cultivator, supplied by Irelands Farm Machinery.

“We only cultivate before and after maize,” explains Mark. “We do produce a lot of grain maize, and the late autumn harvesting often demands remedial work to restore soil health and provide aeration. And prior to maize drilling, we’ll run the cultivator through, but on different points.”

He says that using two sets of points at different times of the season allows the Turbo cultivator to work shallow or deep, depending on the scenario.

“A full width A-share takes care of cultivations in the autumn, to incorporate trash and set the ground up for the following crop,” he says. “And in the spring, we run a narrow point to work the soil down to depth, in preparation for maize drilling.”

“We’re considering introducing a cover crop after cereals, to keep soil biology alive for those fields destined to grow maize,” he says. “It’s early days with the Turbo, and we’ll find the right strategy to continue improving soil health. Importantly, the cultivator is very easy to fine-tune, and it creates a superb finish.”

Used with a 210hp Claas Axion 820, he says output is around 100 acres/day. Mark reports that the Reflex tines do a great job of helping to move soil, while the packer roller and its adjustable knives, add to the quality of finish.

Read more about the Kverneland Turbo