With heavy clay loams at the 440ha Smite Farm located between the rivers Trent and Smite, Richard Ogden has been favouring two passes with a 3m cultivator, followed by a Scandinavian drill using system discs.

But the increasing occurrence of blackgrass at Smite Farm has prompted a gradual shift towards later drilling dates for winter wheat.

“Our 3m drill with system disc is just so weather dependant that we just can’t use it late in the season,” he says. “And a fairly wet autumn in 2013 meant we only managed to get half our 130ha of wheat planted before we were forced to stop.”

His search for a solution put a power harrow drill combination on the map for its weather-beating capability.

“I know output would have been slow, but we would have been able to guarantee to finish drilling,” he notes. “Then I saw a TS drill working with one of my neighbours, and his view was that there is no other alternative. So I took his advice and bought a 6m TS Evo from my local dealer, Sharmans.” 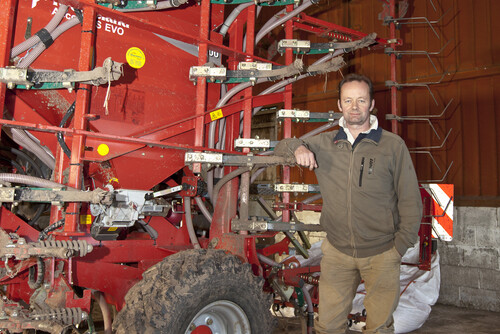 Richard Ogden bought a TS Evo as part of an alternative strategy to beat blackgrass.

Mounted on a Massey Ferguson 6480 tractor shod on Michelin Xeobib tyres – 710s on the rear and 600s up front - the TS affords impressive output in less than ideal conditions.

“The recent arrival of the TS has taken the pressure off and means that we can opt for later drilling dates and still get all our wheat in the ground,” he says. “Seedbeds might not be the finest, but the open finish offers good winter protection and drainage for young plants.”

“I like the tine stability, and with easily adjustable coulter pressure we can make sure there are no seeds left on the surface,” he says. “And with wide tyres, the outfit barely makes a mark.”

Mr Ogden concedes that his TS Evo was a late autumn impulse buy, forced by wet weather, but admits that it has now become an essential part of the farm’s wheat establishment strategy.

“If you are going to leave ground as late as possible to tackle blackgrass incidence, then you really need a TS Evo,” he says. 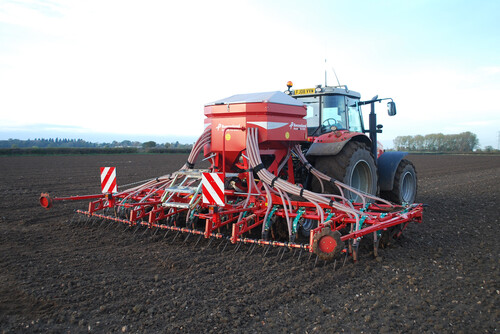 Wide tyres help to minimise compaction for the 6m outfit.