Re-consolidation, after ploughing or before seeding, increases productivity and favours higher yields.

In a few words, these are some of the benefits from re-consolidating soils:

Agronomic benefits
The combination of ploughing and re-consolidating is both efficient and environmentally friendly. Soils are loosened, organic matters are incorporated to enrich the soils. Weeds are controlled mechanically. The elevation of temperature of the ploughed soil is actually positive. The associated water evaporation is limited by the immediate re-consolidation via packers. Water capilarity is hence reestablished for the benefit of the soil life. 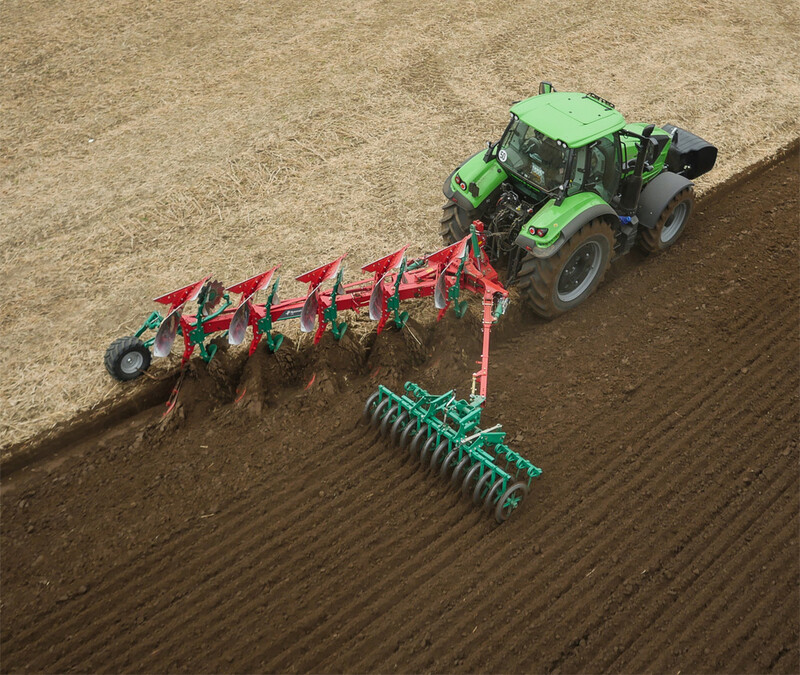 Maximise efficiency
Driven by efficient crop management processes, as a farmer, it is difficult to grant sufficient time for the soil to settle by itself. Furthermore, soil moisture shall be maintained to ensure a good germination after seeding.
Kverneland’s re-consolidating tools are therefore recommended in combination with ploughing or directly before seeding. Coarse clods get crushed, soil is reconsolidated with a favourable soil moisture

Higher profitability
Profitability is generally improved by either cutting down costs or improving yields. By re-consolidating soils either during ploughing or directly before seeding, the profitability improves on both ends. Cost are reduced by completing 2 operations simultaneously. The fuel consumption is optimised too. Yields will improved due to the re-consolidation of the soils.

FOR A SUCCESSFUL SOIL PREPARATION

The soil re-consolidation is influenced by the choice of packers.

Kverneland made a test in 2016. It compared and measured the re-consolidation results when using 3 different packers:

The graph compares the results from the actual re-consolidation

Re-compaction with the packer while ploughing has a lot of useful advantages.

First of all the soil has the correct moisture for crushing clods easily. This makes leveling easier, because hollow spaces will be closed and the useful water is then not lost by evaporation. Different packer systems are available.
Either the packer system is hooked to the plough and pulled during work or it is integrated to the plough, firmly connected and switches-over when the plough reverses, ie the Kverneland Packomat. Which of the two systems is the most efficient? 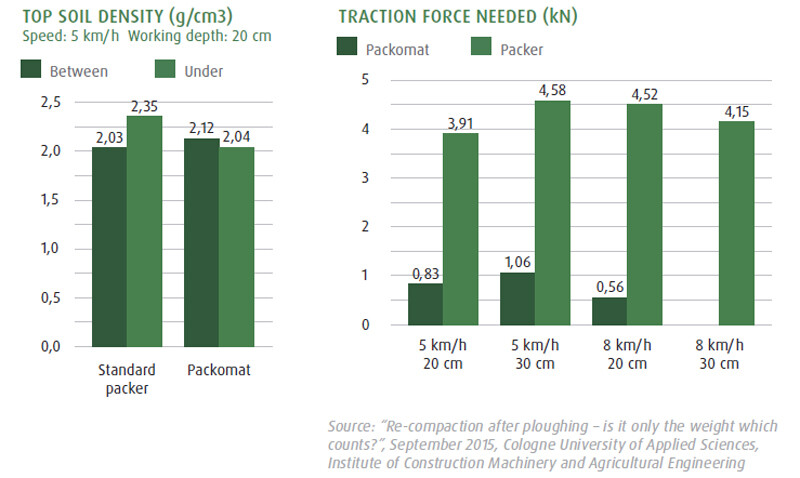 In principle, the much heavier cast iron packer – 1.343 kg as opposed to the 281 kg weight of the Packomat – gains more re‑compaction because its weight penetrates further into the ground. That is really important on light soil. But the Packomat has more advantages on the surface and needs less traction power by far. This beneficial effect in the seeding horizon is measurable and can be proven with the shear force in 15 cm depth. Here we see the advantages for the Packomat, which, by the way, is priced comparably to the standard packer. The ring diameter is clearly smaller than the one from the cast iron model. Therefore the implement weight cannot be supported by the soil and the effect is more punctual than with the big ring from the standard packer. Besides, the integrated Packomat is much more practical and more favourable for transport. You only need 1 tractor to transport 2 implements at the same time. Time is money. A valid aspect if you work on smaller plots and have to move often from field to field.

Author: Prof. Dr. Wolfgang Kath-Petersen
“Re-compaction after ploughing – is it only the weight which counts?”, September 2015, Cologne University of Applied Sciences, Institute of Construction Machinery and Agricultural Engineering

Kverneland offers a full range of packers from front packers to trailed packers for the best soil preparation.