Technology continues to revolutionise cropping. And those with maize mazes can now take advantage of complex maze designs by specialists such as Mazescape, thanks to Kverneland GEOSEED.

Available on Kverneland precision drills, GEOSEED uses GPS for individual row control to follow a seed map. For growers like Richard Hirst, who operates Hirsty’s Family Fun Park at Hemsby, Norfolk, it eliminates the need to manually remove plants from the growing crop to create a complex maze.

Hirsty’s Family Fun Park was one of the first to use this revolutionary seeding process for last year’s eight-acre mega-maze. It was drilled by Norwich contractor DH Barnes, using an 8-row Optima TF Profi on a John Deere 6150R tractor, and the maze was enjoyed by over 30,000 visitors.

The crop was planted automatically, seed-by-seed, using a maze plan created by Mazescape and converted into a seed map through Gatekeeper software, by local John Deere FarmSight consultant Carl Pitelen.

“For the last three seasons, Richard Hirst had been asking me, and Carl Pitelen at his local John Deere dealer, if it could be done,” explains contractor Dickie Barnes. “So Carl found a way to create a bespoke seed map that could be used by the precision farming software.”

Before filling the precision drill with seed, the team made a few practice runs following the seed map, while watching the seeding units operate.

“We’ve used the Optima TF Profi for three seasons, and knew from its section control that the drill could do the job,” says operator Jamie Hedge. “It was amazing to see individual seed units stopping and starting as they followed the map, but we did have a few sleepless nights over it.”

Forward speed was reduced to 5kph, to allow the RTK signal, Greenstar terminal and Optima drill to react to the intense level of stop/start required to follow the intricate seed map.

“It took us all day to plant eight acres,” says Jamie. “Though we were all quite relieved to see the maze taking shape as the crop emerged from the ground. It was 100% correct – what a fantastic result.”

The DH Barnes team sows three maize mazes each season, in addition to a 1,500-acre forage maize crop. But this was the first one they had sown directly from a seed map through the in-cab control box.

“We always sow a maize maze in two directions, using half-seed rate with each pass. The second pass is always at 90-degrees to the first, to fill space between rows of maize, adding density to the maze,” he says. “So it then takes twice as long to sow the field compared to a conventional forage maize crop.”

Without GEOSEED, field owner Richard Hirst had been using a hand-held GPS device to mark and then spray off unwanted plants, to create the labrynth of walkways and routes through the maze. Typically, it was a five-day process.

“This ultra-precise, all-electronic planting process will save thousands in time and labour when compared to conventional planting techniques,” explains Dickie Barnes.

“There is no doubt this has revolutionised the process of creating maize mazes,” he says. “It is a faster and more efficient way to create ever more complex patterns, to challenge the paying public.” 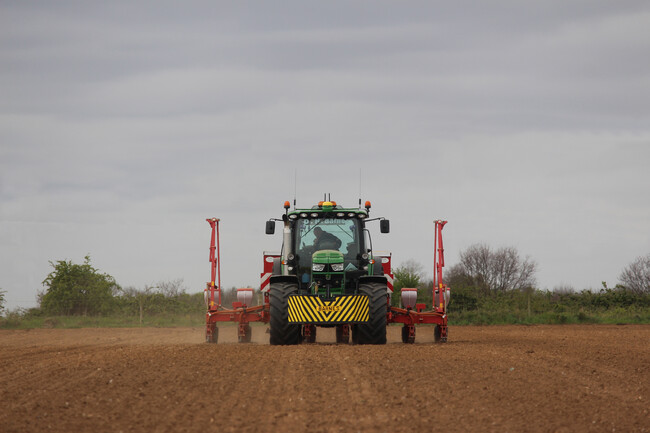