Milling head adds precision to each ration, and is accurate to within 1%.

“With our previous trailed feeder, we were clocking up a lot of hours on both our feeder tractor and telehandler, and I wanted to improve efficiency of the ration mixing process,” he explains. “The options were add a second telehandler, or go self-propelled.”

Based at Park Hall Farm, Ellesmere, Shropshire, the herd has gradually increased in size over the last four years, putting pressure on the feeding regime. Yard space and existing buildings dictated overall machine size, so Mr Bowdler stuck with a 22 cubic metre feeder.

But what he wasn’t expecting, was a considerable number of small efficiency gains that have added up to useful improvements to herd management. These include the opportunity to put more numbers on the herd, a reduction in fuel consumption, shorter mixing and feeding times, greater labour availability, and improved ration quality. 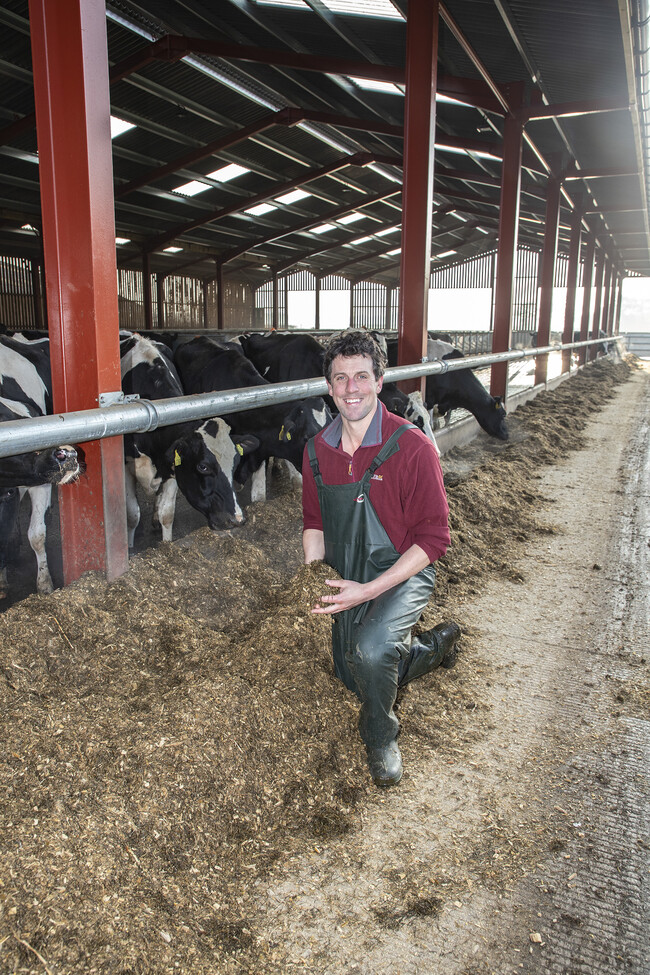 Dickie Bowdler is pleased with the efficiencies gained from switching to a self-propelled mixer wagon.

“The way the milling head fills the tub, we’re getting an extra 1,600kg of payload in each load compared to top-filling our trailed feeder,” he says. “And that extra payload means we’ve been able to put more cows into the herd without needing to make an extra mix. So the feeder’s capacity is better utilised.”

Preparing 40 tonnes of feed per day in five mixes now happens much more quickly, freeing up labour units for the milking team.

“We’ve saved an hour a day on feeding, and we’re burning much less fuel too,” he adds. “The bottleneck was always the telehandler – so this one man, one machine feed system is a big improvement in many ways.”

He says mixing can also continue while driving around the yard, rather than waiting for the process to complete, and the twin vertical auger mixing system creates a much better ration with greater consistency delivered throughout the feed mix.

“Cows no longer sort through the feed, so they have the benefit of the same high-quality grub throughout the day,” he says. “It’s because the milling head weighs the ration ingredients, where a telehandler bucket would just drop in its contents. Nobody bothers to run back to a feed pile with excess product in the bucket.”

“And because of this, each mix is accurate to within 1% - every mix is almost identical.”

With 1,000-hour service intervals and auto greasing, the feeder is expected to clock-up 1,200-1,300 hours/year – much less than the farm’s previous feeder tractor and telehandler.

“Reliability and minimum downtime are essential for a machine that needs to operate every day of the year,” he says. “And if it wasn’t for the backup and support I get from Battlefield Machinery, I probably would have chosen a second telehandler.