The AutosetApp is an App (software application) available on the IsoMatch Tellus Universal Terminal. The App connects the terminal directly with the Kverneland weigh cell spreader and will automatically adjust the spreader according to the settings entered into the App. 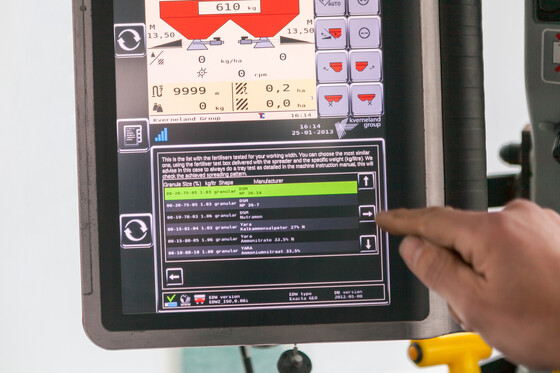 Enter the Data into the App and You’re Ready for Spreading
The first steps are to enter the working width, application rate (kg/ha) and driving speed (km/ha) into the AutosetApp. The next step is to enter the distribution size (%) and density of the fertiliser, and finally the selection of the shape and product type, such as prilled or granular fertiliser. Once all the data is entered you get the setting advice for the product!

After pressing the “Send button”, the working width, application rate, initial driving speed, starting point for dosing and the discharge point will be forwarded to the GEOSPREAD spreader and it will automatically adjust the spreader according to the setting advice you entered in the AutosetApp. Now you are ready to go spreading in the field! The AutosetApp will also work in combination with the Exacta CL EW and Exacta TL weighing spreaders, with the exception being for those spreaders the discharge point (letter setting) still needs to be adjusted manually on the spreader itself.

Always the Most Up to Date Spreading Charts Available
The Kverneland Group fertiliser spreader database with the most up to date spreading charts is always available online. The AutosetApp can be connected to the fertiliser spreader database in two different ways. As soon as there is a WIFI network available (or you can create a WIFI hotspot with your smart phone) you can get connected to the online database via the IsoMatch Wireless WIFI USB adapter. The AutosetApp checks automatically if there is an actual database available to download. The second solution is to download the actual spreading charts database from the internet website www.kvernelandspreadingcharts.com on an USB stick and upload the database directly into the IsoMatch Tellus terminal.