“Prior to buying the GEOCONTROL machine, we had been using a Kverneland TL spreader equipped with weigh cells and that gave us an opportunity to use auto stop/start at headlands,” he says. “We like technology that offers a benefit and this system clearly has massive potential to save us money.”

Growing wheat, oilseed rape, spring barley and sugar beet, the 650ha Glebe Farm operation works on a 32m tramline system with an average field size of 14ha. Mr Ward believes using GEOSPREAD for section control while applying granular urea has the potential to save thousands of pounds through reduced overlaps and greater accuracy.

“We can see on the IsoMatch screen just how well the system is working,” he says. “The graphics show how the spread pattern is constantly adjusted to maintain the application rate and avoid overlaps. It is very clever and exceptionally accurate at 32m.”

The 2008 Arable Farmer of the Year says that since using GEOSPREAD, his crops look much healthier on headlands because there is no longer any double dosing of fertiliser.

“We previously had to put extra growth regulator on the inner part of the headlands to prevent corn from going flat, but this is now a thing of the past,” he says. “We cover the same area, but without overlaps, we’re actually spreading across fewer hectares in total, and this in itself will add up to significant savings.”

“If you don’t keep up with developments and embrace technology, you will eventually get left behind.”

“There is huge potential for cost savings and efficiency from the GEOSPREAD system,” says Andrew Ward. 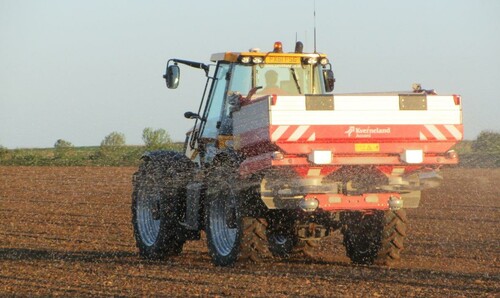