THE VIRTUAL CIRCLE OF PLOUGHING – HUMUS AND CO2 STORAGE

Unlike all other economic sectors, agriculture and forestry can store carbon and thus act as a natural greenhouse gas sink.

Soils can store carbon and thus serve as a carbon sink. Likewise, soil carbon can be released by means of CO2 emissions and nitrogen by means of nitrous oxide  (N20) which increase the greenhouse gas emissions.
This is why it is important to consider land usage and soil management, in order to somehow control the global warming potential.

Carbon starts in the air as the C in CO2. Through photosynthesis, plants take the carbon from CO2, combine it with hydrogen from water in the soil (H20) and, using energy from the sun, make sugar (CH20). Finally, a plant’s metabolism takes that sugar and makes complex molecules recognised as a plant, later referred as “organic material”. 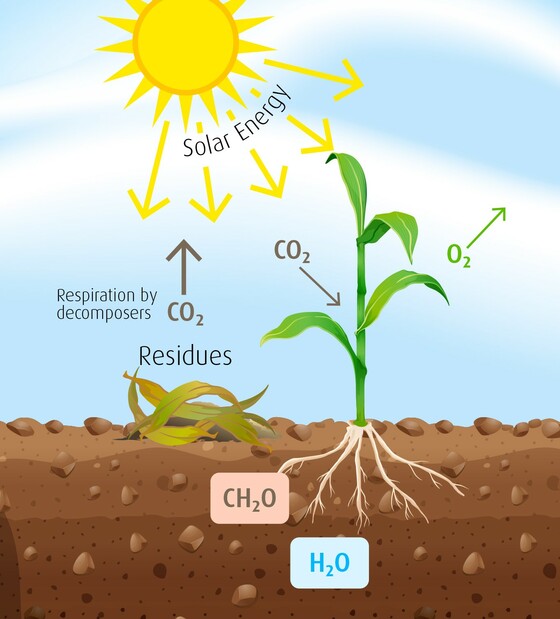 Soils used for agriculture are by far the largest terrestrial storage of organic carbon. Saying that, the storage capacity varies a lot from region to region depending on the soil types. Peatland soils, for example, can store far more organic carbon than mineral soils.

Humus is found in the top soil layer. The commonly agreed, ideal, healthy soil composition is as described below: 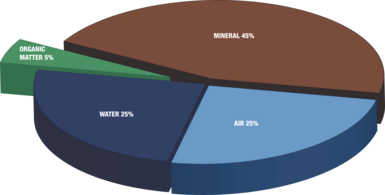 Humus consists of plant residues (organic material) transformed by soil animals and micro organisms into organic matter. It provides nutrients for plants, absorbs water like a sponge and holds the soil together.
Humus has a positive effect on yield potential and yield security of soils. High humus content can increase water storage capacity and thus water availability. In addition, the humus rich soils warm up quickly in spring due to their dark color, which promotes plant growth.

Representing almost 60% of the humus, carbon is the most important element of soil organic matter.

The proportion of humus content in the soil results from a complex interplay between: 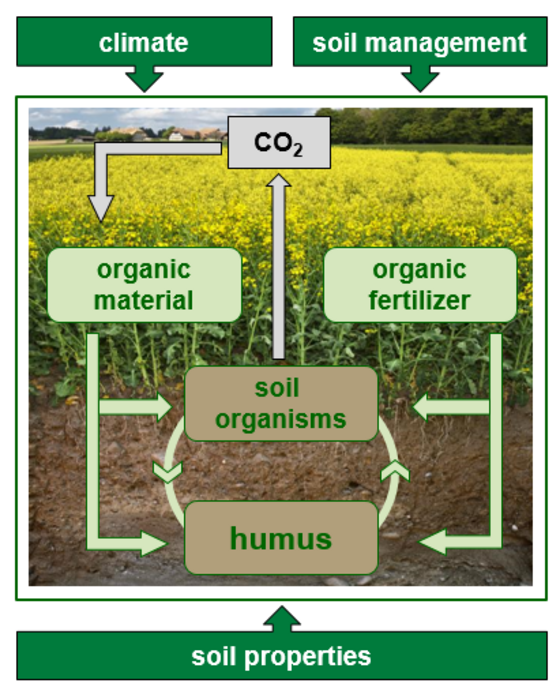 Humus bears a high responsibility on the climate: if the supply of organic carbon in the soil decreases, carbon dioxide (CO2) is released. If the supply increases, CO2 is fixed by being sequestrated in the soil. Long term stable humus (Kg/Ha) is particularly important for climate protection.

The soil humus content needs to be preserved. When evaluating the impact on the humus content of different crop establishment systems, the results are clear: non tillage and reduced tillage techniques do not have any positive effect on humus establishment.

In more than 100 field studies conducted in Germany, analysing the entire soil profile, the Thünen Institute concluded: crop establishment systems without tillage result in a far lower storage of carbon per ha and year. In many studies, there was even a loss of humus.
Source: Thünen Report Nr. 64, November 2018, page 194ff

An explanation is given by Dr. Axel Don, Thünen Institute: “Humus derives from root and crop residues as well as from organic fertilisers such as manure and slurry. It enters the soil mainly from top. Without the reversal tillage with a plough, the newly formed humus remains close to the surface and is not mixed into the topsoil evenly. And there is an additional negative effect: without loosening the soil, there is a likelihood for increased microbial nitrate decomposition and higher nitrous oxide emissions (N20) . This gas is 300 times more harmful to the climate than CO2.”

Why ploughing with Kverneland ?

Ploughing is referred to scientifically as an efficient crop establishment technique which helps create humus, sequestrate CO2 and prevent N20 harmful gas release to the atmosphere. Ploughing must be accomplished in the best manner. Kverneland bodies make it happen. They are designed to suit any soil conditions and are renowned worldwide for their high performance. Ploughing with Kverneland is a  step towards high yields and revenues: efficient, non-chemical method for seedbed preparation, it controls weeds, slugs and pest. It repairs damaged fields and creates the optimal conditions for plant growth. Ploughing creates the ideal balance of air-water-minerals content and humus. 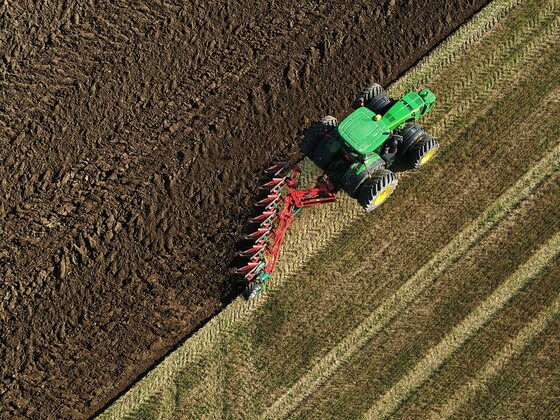