When the time came to upgrade a 10-year old DF1 power harrow and toolbar combination, Rob Laybourn had little reason to move away from a tried and trusted, and very reliable outfit. That’s because his DF1 system and front hopper had been the pinnacle of reliability and accuracy.

When the time came to upgrade a 10-year old DF1 power harrow and toolbar combination, Rob Laybourn had little reason to move away from a tried and trusted, and very reliable outfit. That’s because his DF1 system and front hopper had been the pinnacle of reliability and accuracy.

“It’s been so good, that I decided to keep my original front tank and metering unit, but trade-up to a wider power harrow and a toolbar equipped with CX-II coulters,” explains Rob. 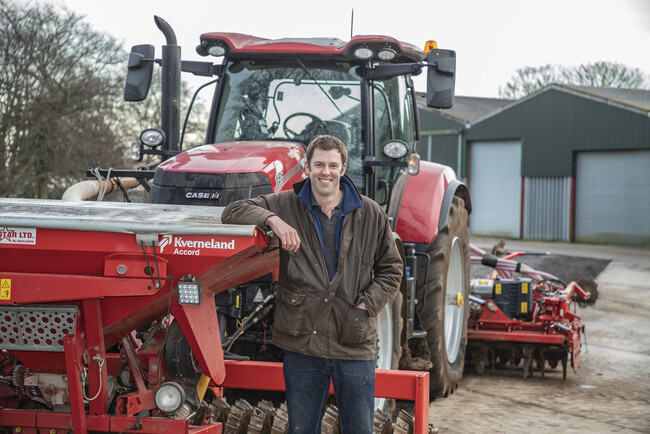 “The DF1 is a flexible and versatile system, that suits our cultivation strategy” Rob Laybourn, farmer.

“We found that the Suffolks needed far better conditions to work in – and they struggled to penetrate in trashy seedbeds,” he says. “In less than ideal conditions, the Suffolk coulters could drag trash which could result in a bow-wave and the toolbar could then lift and ride over. They worked okay, but seeding technology has moved on.”

Trading as RG and RWF Laybourn from the 650-acre Elmsall Lodge Farm, Badsworth, west Yorkshire, the family farm operates a mostly arable enterprise. Soils are medium to heavy, sitting over clay, with winter wheat, winter barley and oilseed rape forming the basis of the farm’s rotation.

“We’re keeping on top of blackgrass by rotational ploughing with a five-furrow Kverneland EG85, which covers around 150 acres each year,” he says. “The rest is min-tilled, mostly to encourage a stale seedbed, then drilled with the DF1.”

And this is where a change in coulter system will improve seed placement for the family business, as it seeks to lower establishment costs and increase efficiency.

“From what we’ve experienced so far, the CX-II coulters simply cut through anything on the surface to achieve a far more accurate seed placement depth – even in ploughing,” says Rob. “And the amount of coulter pressure adjustment will offer scope for fine-tuning this new toolbar in different seedbed conditions.” 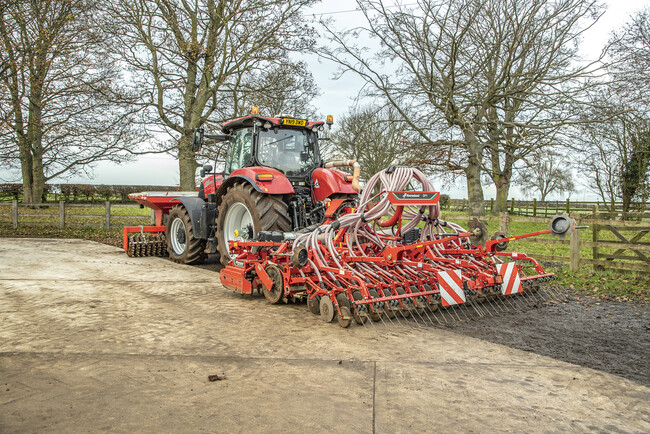 His previous model was a 3.5m outfit. Coulter spacings were tweaked to create a 3.42m working width, resulting in seven passes to create 24m tramlines. The new 4m unit needs only six passes to achieve the same goal.

“We’re looking for much greater efficiency, so I’ve also traded-up with horsepower,” he adds. “My previous Puma 160 has now become a Puma 185. So staying with the DF1 system means weight is spread out, which also helps with minimising compaction.”

He says outputs of the old system varied from 20-55 acres, depending on field size.

Consolidation ahead of the power harrow comes from a 3.5m Guttler press, sat below the DF1 front tank. Though a wider, folding unit is planned for next season, to match the 4m folding power harrow and toolbar.