The combination of seed placement accuracy, operational friendliness and performance is what drew Pete Atkinson of David Atkinson & Sons to the u-drill.

“We encounter soils that extend from limestone through to heavy clay, but without the luxury of land being ring-fenced, we also have to spend time on the road travelling between locations,” explains Pete who runs the business with his parents David and Sue, and brother Ben.

“It was important for us to choose a drill that performs every bit as good on the road as it does in the field, because we’ve found roadwork to be particularly hard on our equipment.” 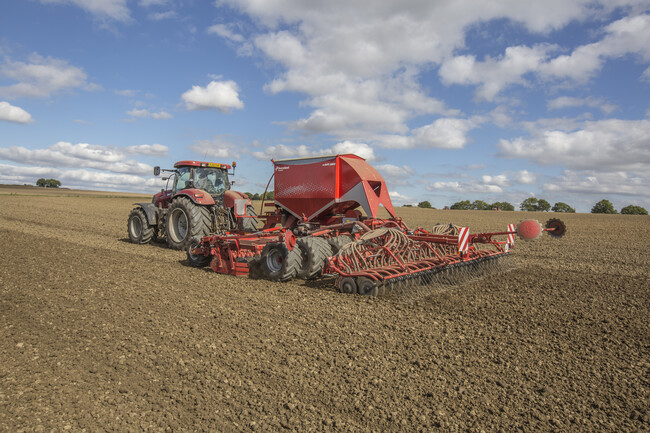 Seeding performance from the u-drill is superb, says Pete Atkinson.

He says the farm tried a variety of drills while looking for a suitable replacement for their 4.8m MSC - the farm’s first min-till drill.

“Going wider was a no-brainer for more output, so we looked for a 6m model,” he says. “But because our Case Puma 225 struggled with our old 4.8m MSC, we were expecting to need more power, particularly on the banks with a wider, 6m drill.”

With extra power in mind, the firm geared up to a Quadtrac to get more output from min-till cultivations ahead of drilling. But so far, Pete says the new drill has only been used behind the Puma 225.

“The u-drill rides on top of the seedbed rather than in the soil, and I’ve found that my Puma can pull it all day long at 15kph, dropping to 10kph on the steeper banks.”

“We don’t have to fill the hopper, so we can travel lighter when working on the steeper parts of the farm.”

While the bulk of the cultivations workload is under a min-till regime, Mr Atkinson says the farm does plough rotationally, in particular for second wheats.

“We are using kit and techniques to try and keep on top of blackgrass, and we are also considering spring cropping too,” he says. “There are some areas that we farm which are wet and very heavy - if you don’t get them drilled in plenty of time during the autumn, you’re not going to get them until spring. And this was another reason to up the ante with a larger drill.” 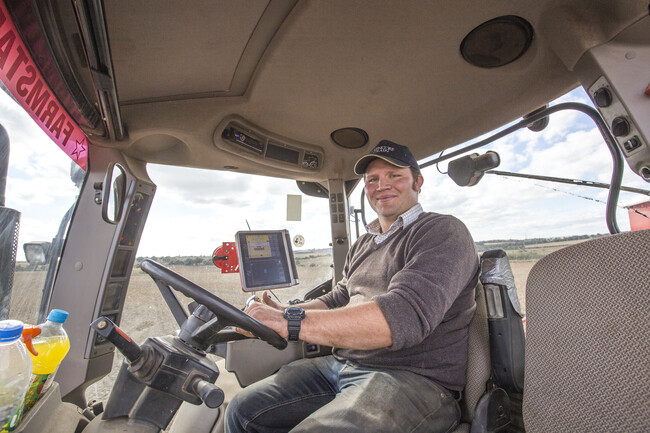 “What we really like about the drill is the way it buries seed,” says Pete Atkinson. “Seed placement is consistent and accurate, and it leaves nothing exposed on top of the seedbed.”

When it comes to output, he says field size and location eats into productivity, though the extra working width does compensate for this.

“We go from 1.5 acres up to 100-acre field sizes, so there’s a lot of fiddling about moving from field to field. But 100 acres/day is comfortable,” he adds. “The drill is so easy to use, and has such good output, that I can easily fold up and head back into the yard to refill with seed, leaving the others to prepare more land in front of me.”

Typically, land is min-tilled using a 3.6m deep loosening cultivator pulled by the Quadtrac to make the most of its five subsoiler legs, discs, spring tines and double press format. A pass with a 6.3m shallow cultivator then follows, and stale seedbeds are sprayed off, then drilled and rolled to complete the process.

Should weather conditions deteriorate, a power-harrow drill combination is available as a last resort.

“Since we bought the u-drill, we’ve been comfortably on top of the autumn workload,” he adds. “We demo’d the unit from Farmstar in 2015 and it stayed on the farm.”

“What we really like about the drill is the way it buries seed - placement is consistent and accurate, and it leaves nothing exposed on top of the seedbed.”

He believes a lot of this increased performance is a result of the way the drill prepares, levels and consolidates ground ahead of the coulters.

“We’ve not yet come across any field conditions that have beaten the u-drill,” he says. “It has done a great a great job in every field we’ve drilled and is a big step up in many respects.” 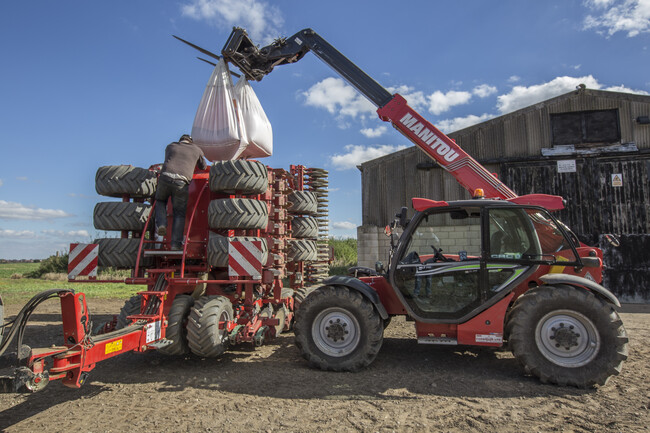 Drill hopper is easy to top-up, and the whole machine is user-friendly.

The 6m u-drill 6000 uses a central chassis to offer a reduction in weight without compromising strength. A centrally mounted hopper packs a 4,350-litre capacity and uses two electrically-driven Eldos seed metering units. Electric metering has also led to GEOCONTROL capability, with half-width shut off and variable rate seeding included in the standard specification.

Optional weigh cells can be fitted to the hopper, to further extend functionality and the drill is fully isobus compatible.

Pressings on each disc arm allow breakaway movement, but return each disc to its correct working position to maintain its location and cutting angle.

Packing ahead of seeding is by a 900mm diameter offset wheel packer, reducing draft with its low rolling resistance.

A fully-programmable management system lets the operator initiate a headland sequence with wheels, discs and coulter bar all capable of automatic operation in timed stages, using one button.

“I do love the IsoMatch Tellus display,” he says. “It is one of the easiest terminals I’ve ever used. Setting a headland sequence is straightforward, and the drill lifts and lowers its sections in order - it is very clever and very precise.” 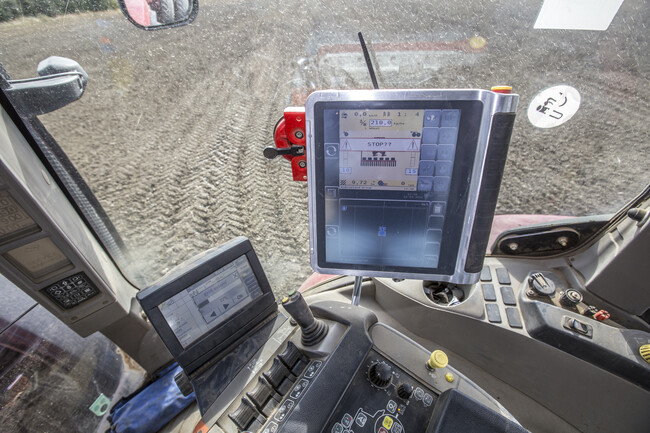 He says that drill calibration is also very easy to carry out, adding that electronic tagging on different metering rollers prevents you fitting the wrong roller for the seed type in use.

“This drill is so easy to set up and use, that there is no excuse for not re-calibrating every time I change seed varieties,” he says.

Equally importantly, Mr Atkinson reports that the u-drill is solid on the road.

“When folded for transport, the central two rear wheels are raised off the ground, leaving a pair of wheels on each side of the drill in contact with the road, so it rides solidly and tows just like a trailer.”

“It is very easy for us to move between different the blocks of land that we farm,” he adds.