Phil Strout Contractors believes in delivering the best service for its customers.It is why the business opted for an Exacta-TL GEOSPREAD to apply fertiliser for customers, in addition to applying fertiliser on the 202ha of arable land he farms at Bradridge Farm, Boyton, Cornwall

“Giving your customers the best possible service with the most accurate and efficient kit is as important as pricing,” he says.

Phil Strout runs a general contracting business with his brother, Simon and father, Bernard. The business’ mix of grassland and arable operations has created a fertiliser spreading operation that now applies several thousand tonnes of fertiliser across a few thousand hectares.

“We use the spreader with an IsoMatch Tellus control box, so we can map fields and follow A-B lines in grassland when we’re not running on tramlines,” he says. “If the operator does drift a bit on grassland, the GEOSPREAD will cleverly compensate for any overlap.”

“And the same performance is assured in small, awkward-shaped fields, where overlaps are now non-existent,” he says. “We have eliminated striping on slopes and we are seeing crop canopies that are even.” 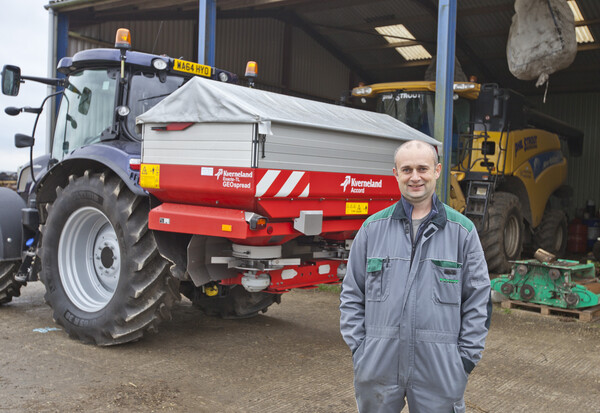 Phil Strout says the Exacta-TL GEOSPREAD is delivering an impressive level of accuracy for him and his customers.

Having run the machine for two seasons, he is impressed with its performance and the reduced level of vane wear compared to his previous spreader.

“We were getting through two sets of vanes each season,” he says. “But the GEOSPREAD has just had its first replacement set after two seasons of use. Its running costs are very low and its accuracy is very high.”

“I do like the way GEOSPREAD cleverly prevents overlaps and reduces the spread width without affecting the spread pattern or application rate,” he says. “You know every bit of fertiliser is going exactly where it should. And my customers like that.”