The full story of how the Reversible Point was invented back in 1971 and became our most selling Original Part of all time.

A small piece of metal - A big piece of ploughing history!

Before 1971, shares and points in one piece was the best alternative available for ploughs. Farmers had to change the whole share when the point of the share was worn. In 1971 the Kverneland factory launched two new products: the separate share and the reversible plough point.
The innovation let farmers wear down both sides of the point, leaving the share to live its own lifetime. It was a groundbreaking and cost-efficient concept.

It all started by coincidence

At a product development meeting in 1970, Director of development, Olav Njå, by coincidence, came up with the idea of the reversible point when trying to redesign and improve the “one piece” ploughshare. Little did he know he had just set a new standard for plough points worldwide - that still is holding up by today’s standards.

We are now celebrating 50 years of producing the reversible point, and in spite of how much the agricultural industry has advanced in that span of time, it remains the most sold original Kverneland plough part of all times. 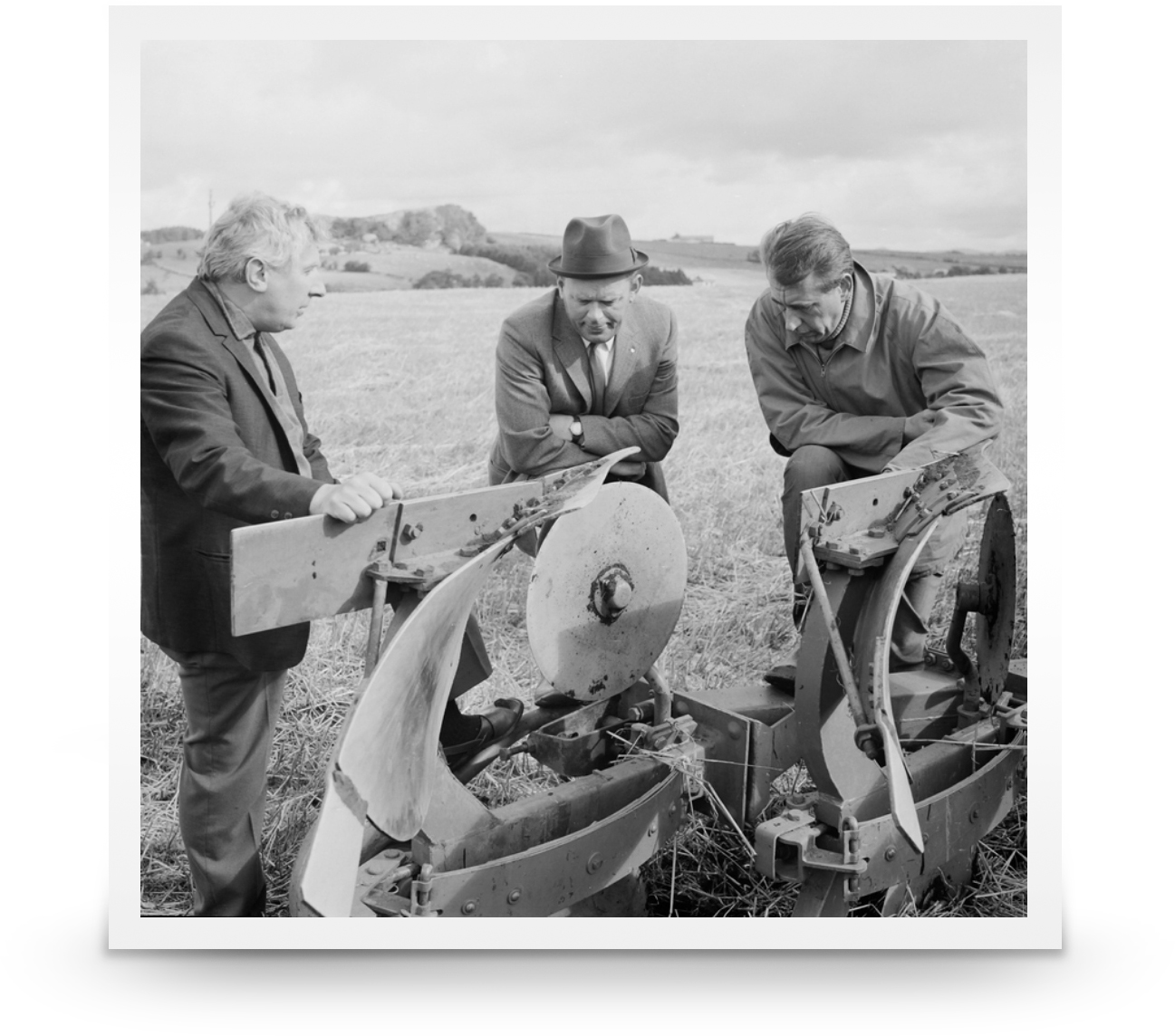 Field test in 1971. Left: Olav Njå, the inventor of the reversible point. 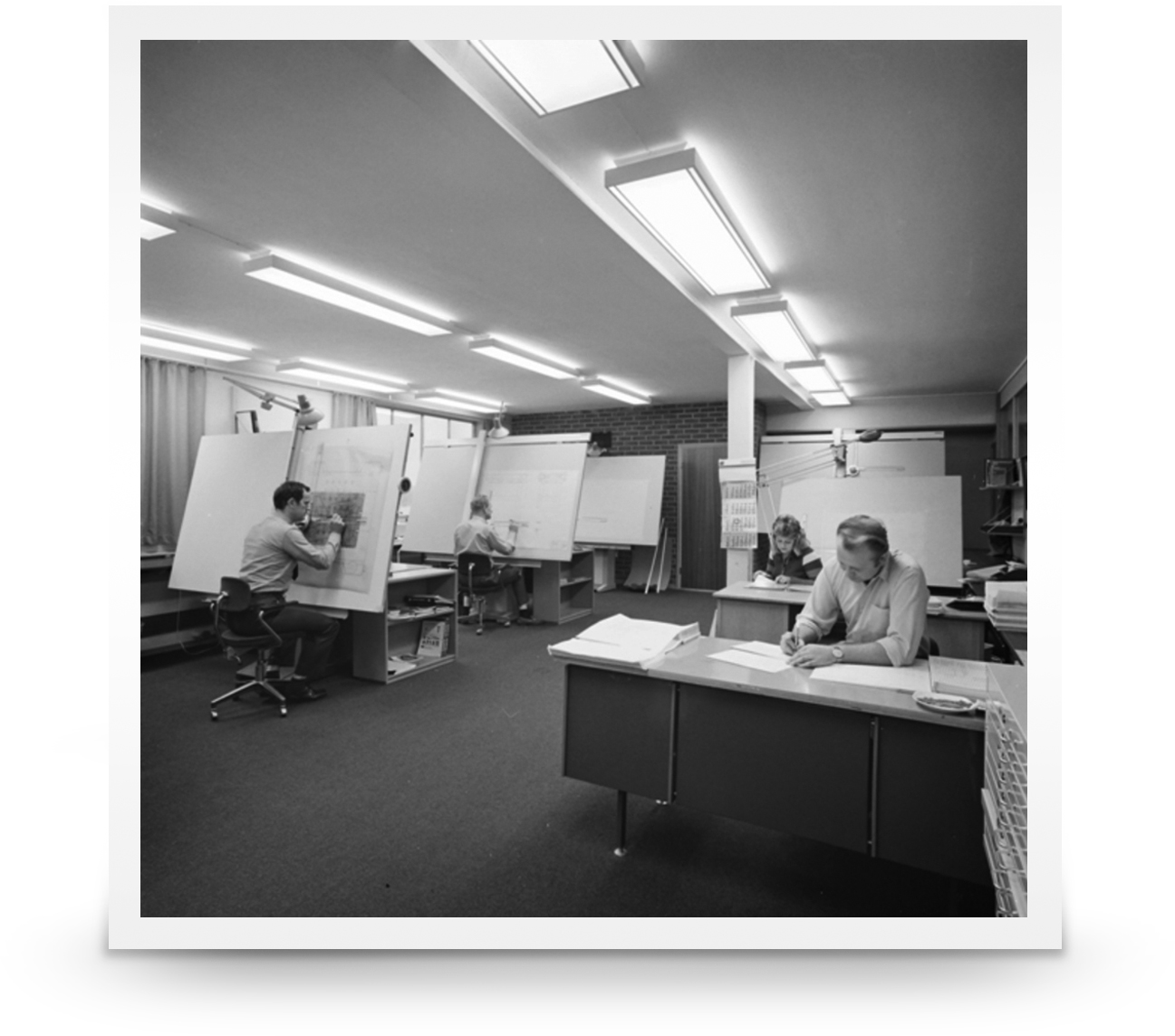 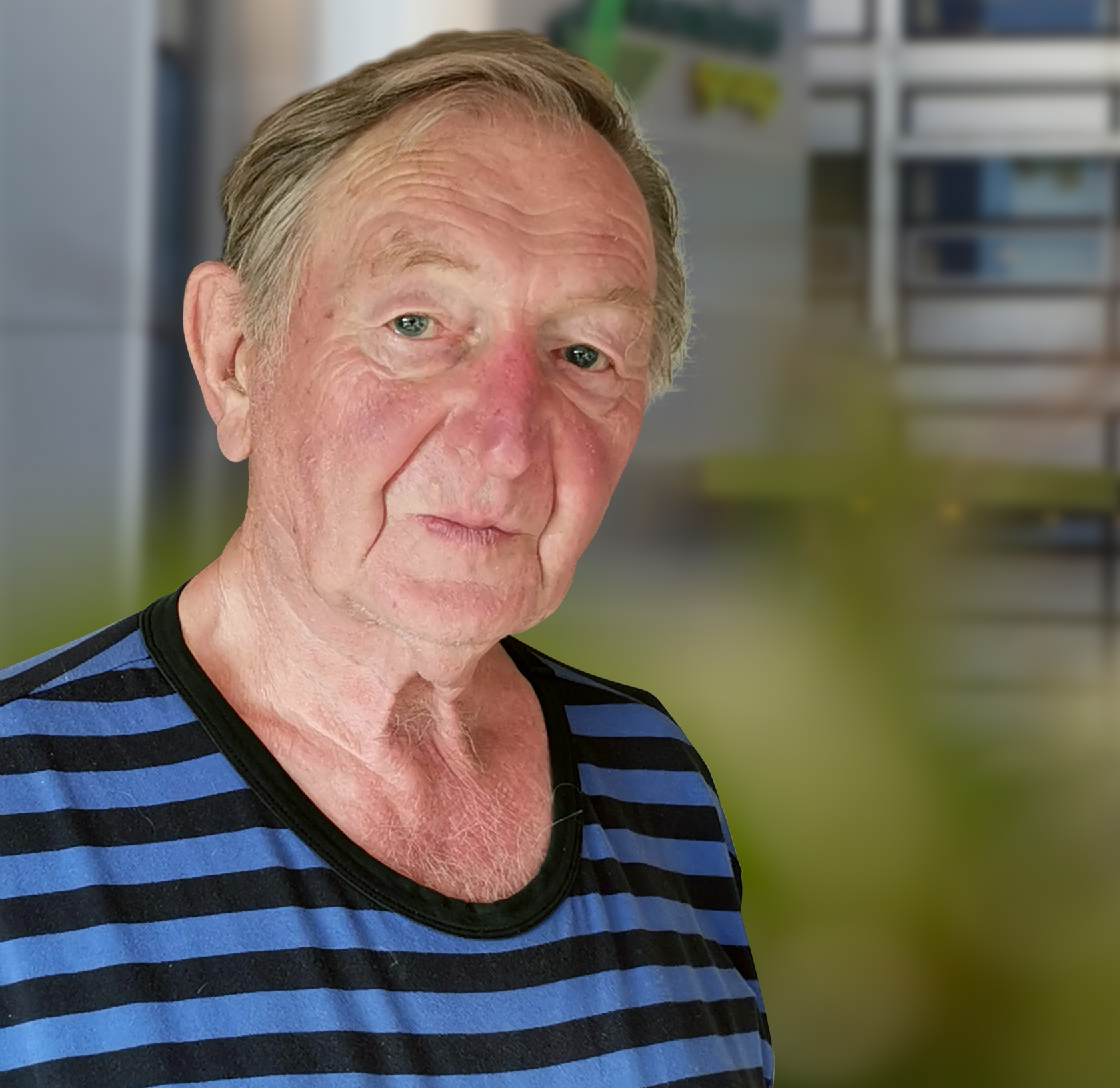 To get a better understanding of how the reversible point was invented, we had a chat with 85 years old Jostein Eide, who had a leading role in sales at the Kverneland factory back in 1971. He was the 3rd generation employee of his family at the factory, and was active from 1955 until 2003 when he retired.

By the end of the 1960`s; stronger and faster tractors was being used by farmers and this put more pressure on the point and share. As a result, the ploughshare was due to be updated to perform equally good under the new conditions.

“At the end of the 1960s the old ploughshare was not performing as expected anymore and we started looking at improvements,” says Mr. Eide. Many ideas and prototypes were brought to the table, but the task seemed impossible.

“At one point the engineers sat together an entire night to come up with a new share. However, the result presented the next morning, was not up for the task. It was too thick at the point and presented poor soil penetration and stability in the following field tests. Wave shaped shares and ribbed edges was also tested, but it did not solve anything at all. In fact the wear and tear got worse,” Mr. Eide remembers.

“The added feature of the reversible point was designed to offer customers even more utilization of the steel point, making great value for money”

“Then...one day, as we were together in a meeting room to discuss what we possibly could do, the idea came up. Olav Njå, remembered the two piece share used on the old Kverneland horse plough, named Odin. From there we started drawing out the concept of a two piece share for the tractor plough”. The Odin plough had a molded share with a forged steel point. The idea was to modify this principal to fit a tractor plough and optimize for modern production methods. During the drawing process, the idea evolved into also making the point reversible. Arnold Furre, the head of the factory laboratory, saw big potential in the reversible point system and allocated heavy resources to development. “We quickly realized that the new point had excellent soil penetration and made the plough remarkably stabile in the fields. This was crucial to succeed with the new product. 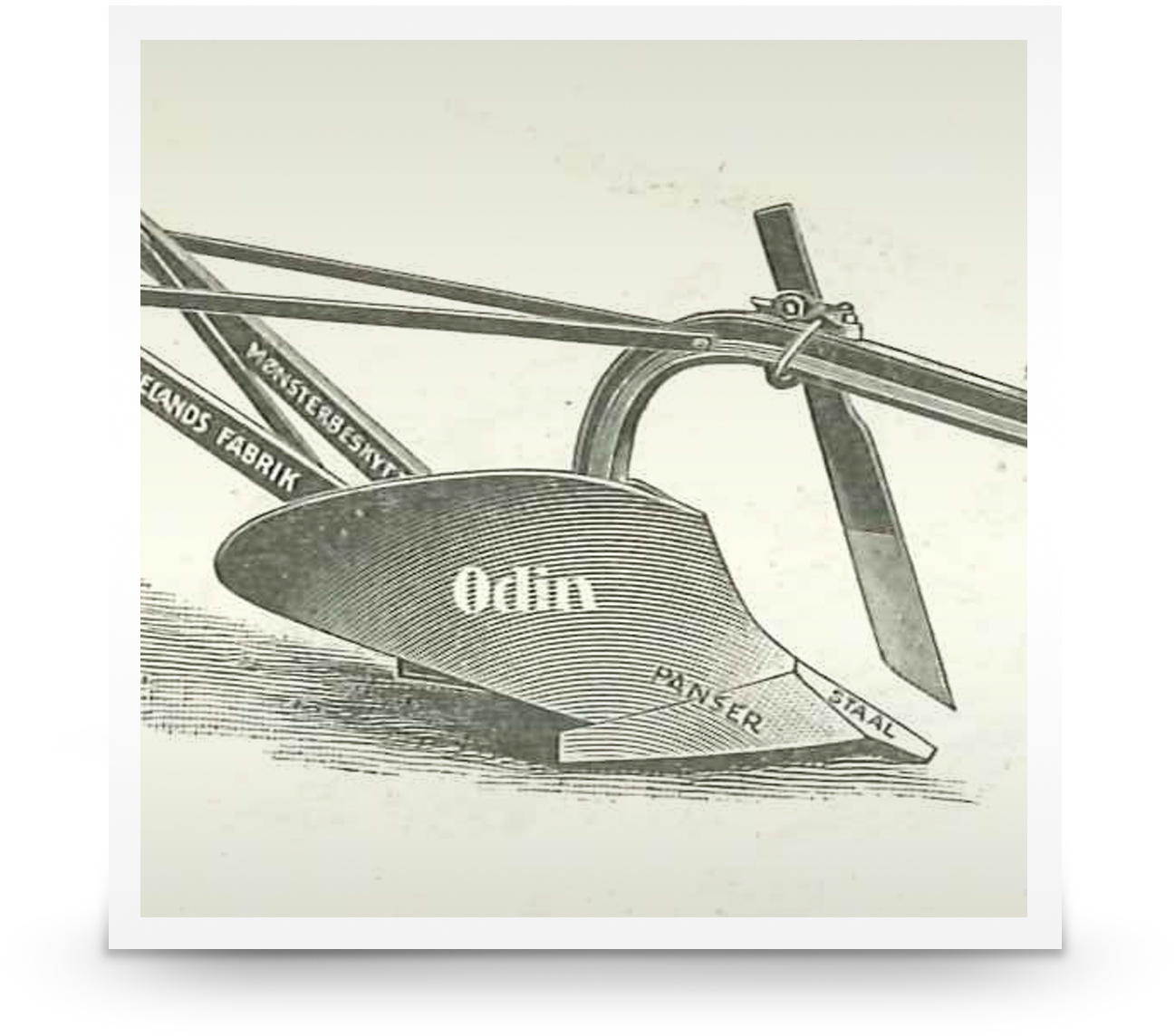 Horseplough “Odin” from 1930 had a seperate share and point. 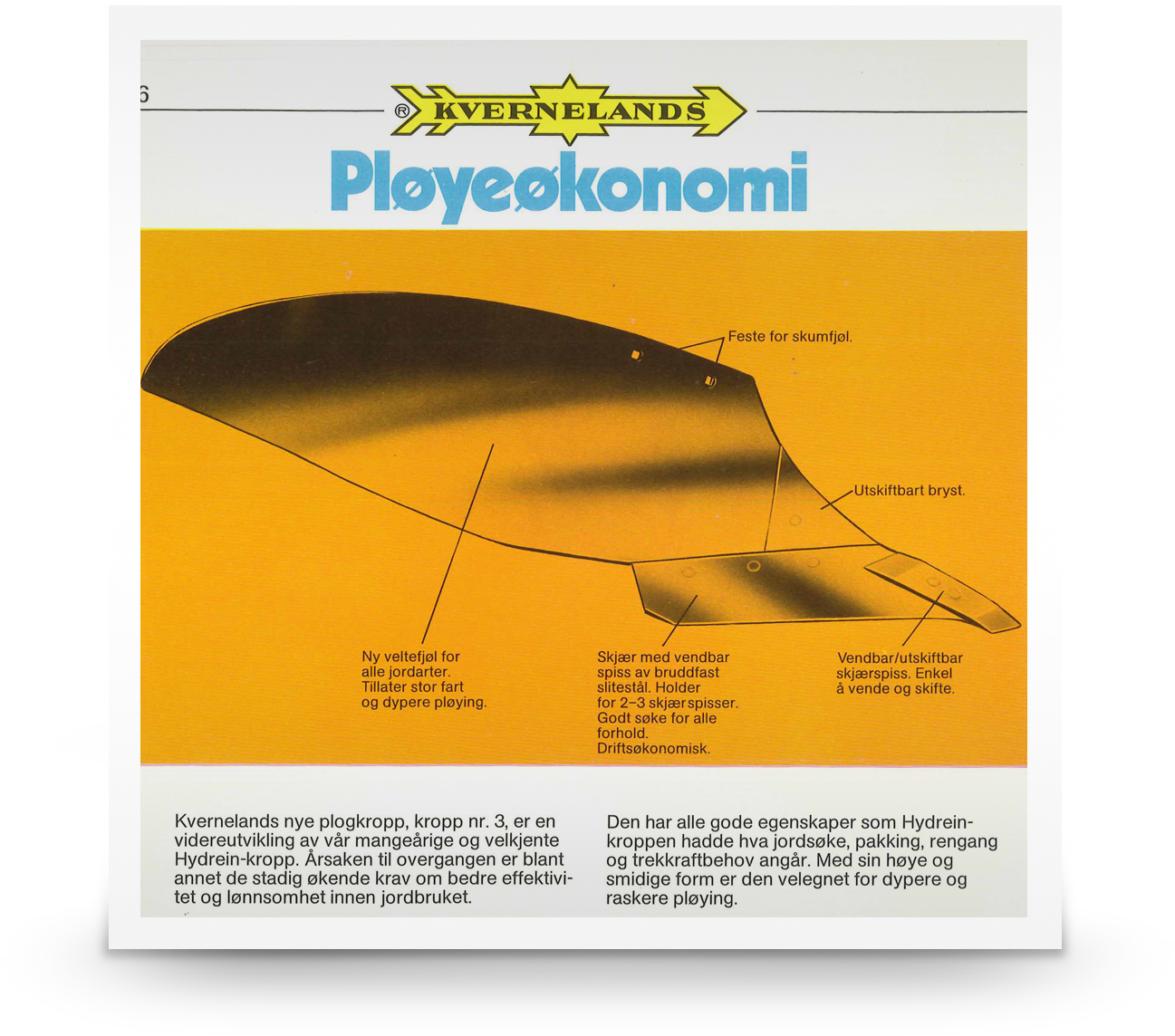 The reversible point presented in a brochure from 1976.

The Reversible Point takes on the world

Convincing the markets to apply new inventions is not always easy. In the early days, a box of points was sent to a test facility in Europe. The test facility was not at all intrigued by the concept and was not interested in performing any tests. Luckily, farmers thought otherwise and within 2 years of the launch, the original reversible point was completely accepted by the markets.

In the early 80s, the factory in Kverneland was looking for additional improvements on the reversible point. Up until then Kverneland heat treated the whole point which meant that the hardness of the steel had to be limited not to break around the bolt holes. While setting up a new production line, the engineers developed a new method of heat treatment, called zone hardening, letting them increase hardness on the edges and keep the area around the bolt holes soft. “The zone hardening meant that Kverneland could increase the edges up to 57 Rockwell, which no other competitors could match without points breaking around the bolt holes” says Mr. Eide proudly. 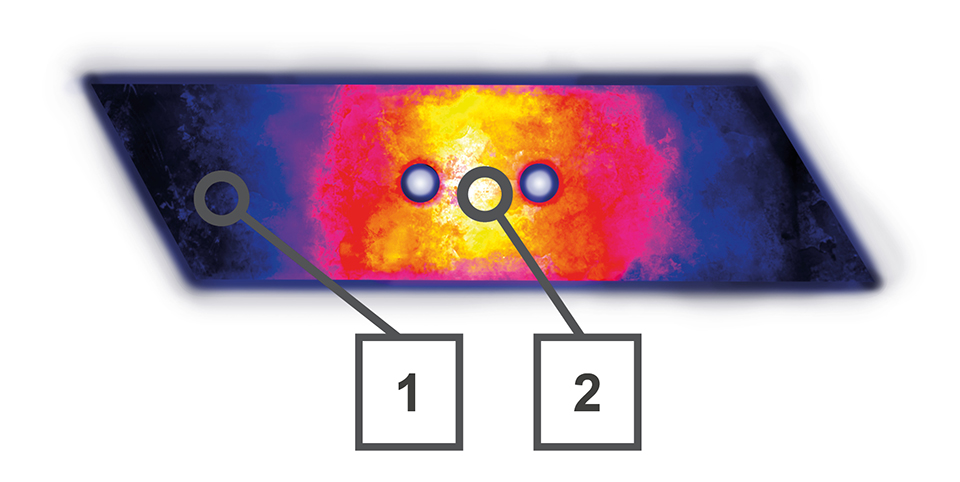 The reversible plough point was so successful that in the following years, that “Lots of companies made efforts to copy our product“, says Mr. Eide. 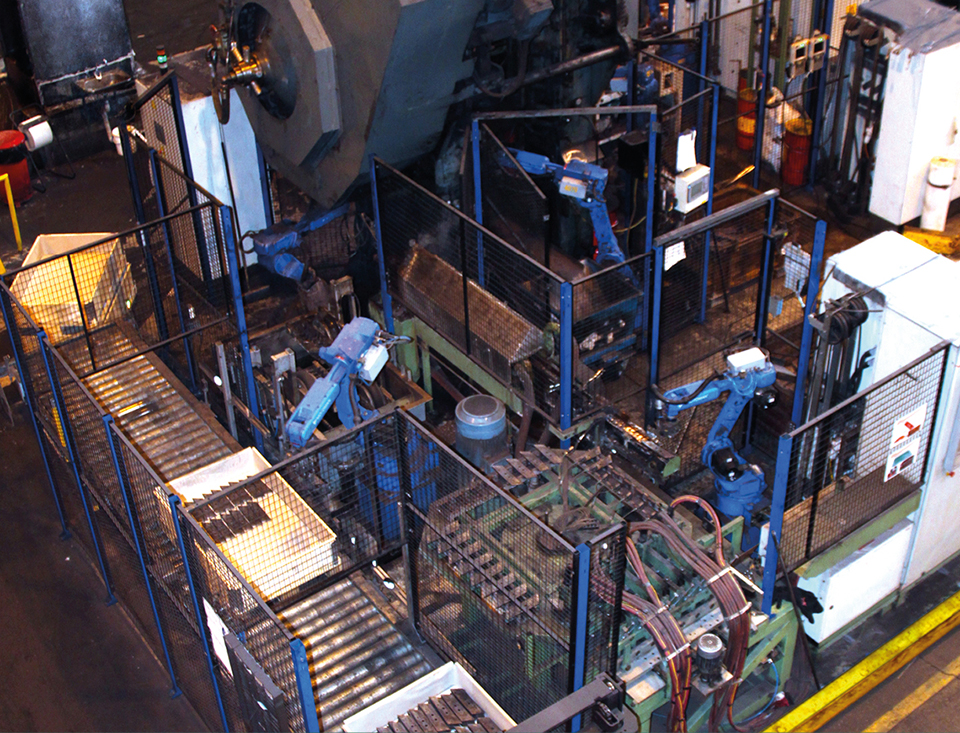 Standing the test of time

Today, we still find the groundbreaking work of Olav Njå, Jostein Eide and the entire 1970 development team to be a vital part of Kverneland’s offering to farmers worldwide. The reversible point is a well known branch standard for ploughs and our most sold wearing part of all times. Kverneland Group are continously focusing on the special zone hardening methods to provide a solid plough point with longer lifetime, whilst resistant against breakage in stony soils.

Congratulations to our jubilant, and a big thanks to all the hard working farmers that keeps on pushing the borders of farming - leaving us on our toes to offer the very best Original Parts available.

Important events leading up to 1971

To understand why Kverneland released the reversible point in 1971, we would have to look back at some major events within the evolution of agriculture.

In the early 1900’s, Kverneland’s main business was horse drawn implements. In the 1910s -  affordable light weight tractors started gaining popularity especially in the USA. The one tractor that really set things off was the Fordson tractor, released in 1917. It was a lightweight tractor with a 20 HP engine.

Tractors were perfect for the bigger farms on the American continent and quickly gained popularity. In Europe, farms were smaller and the growth of tractor sales were slower, as the horse still was considered the best economic choice. In fact, the tractor did not completely replace the horse in European farming until the late 50s and early 60s.
After World War 1, the Fordson tractors started increasing their sales in Europe. At first farmers would use converted horse ploughs on their tractors, but as the effective Fordson increased power and speed, the implement manufacturers quickly started developing ploughs specialized for tractors.

Kverneland released their first tractor plough in 1928 and simply named it “Traktorplog.” Which, from Norwegian, translates to “Tractor plough”. It was a 2-furrow plough equipped with the classic ploughshare, where point and share was in one piece. By 1960, the average tractor had 40-50 hp, still not causing enough wear on the shear point to raise any problems. In 1962, the first 100 hp mass-produced tractor was launched and was the start of a swift increase in power for the tractors being offered to farmers worldwide. During the 1960s, farmers would increase ploughing speed and demand bigger ploughs with more furrows. The traditional ploughshare was under a lot of pressure - wearing down in a faster pace than ever before. It was time to invent and develop products to meet the future of farming. 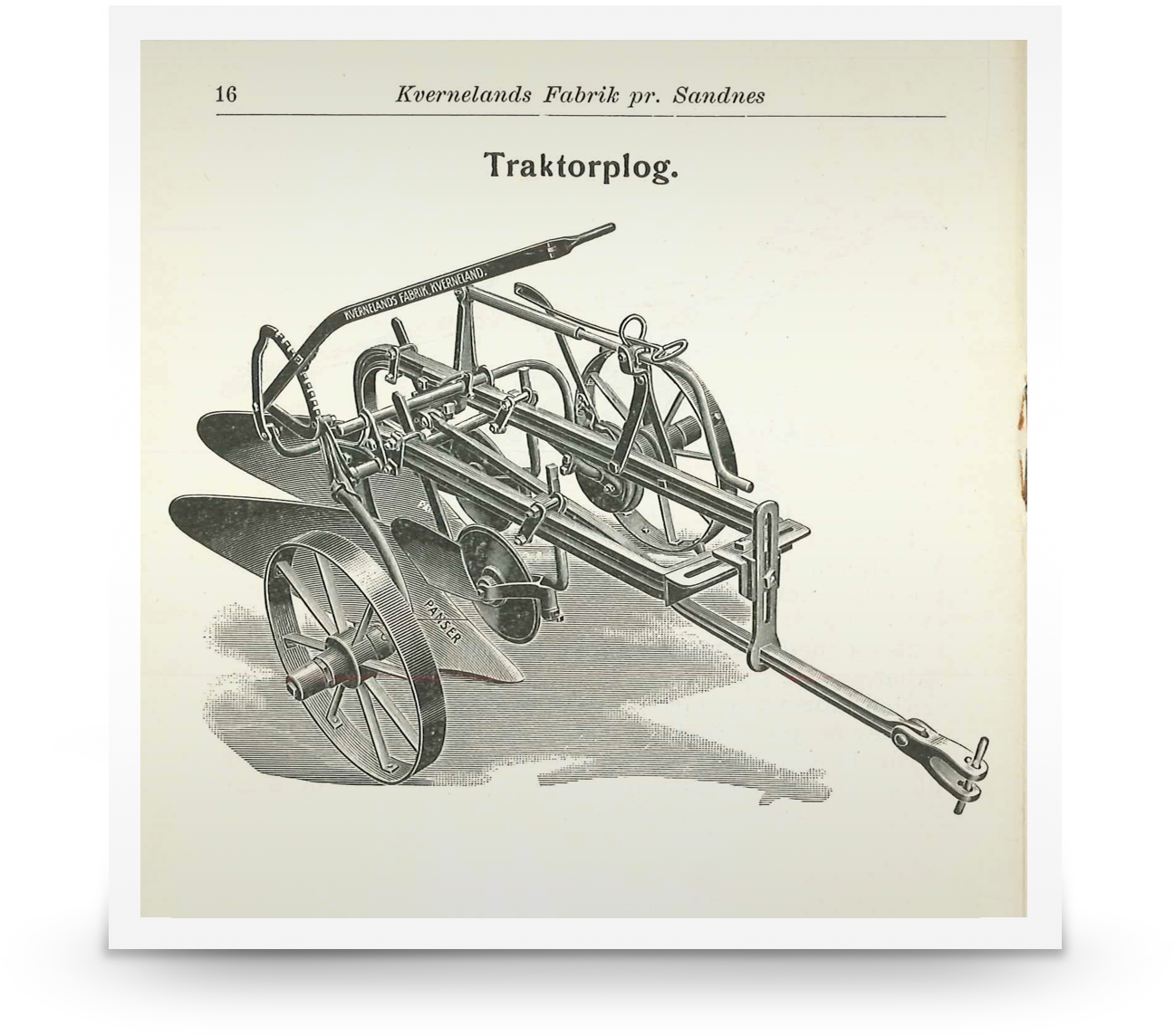 REGISTER YOUR MACHINE AT MYKVERNELAND.COM