Farming in a catchment sensitive area, Emma Foot and her father Christopher are constantly looking for ways to add value to their crops.

It is one of the reasons why they switched to an Exacta-TL with GEOSPREAD, as they sought ways to make fertiliser applications more accurate and more efficient.

“We bought the spreader with the intention of saving money,” says Emma. “We have a lot of triangular shaped fields so the amount of overlap we have to tolerate is excessive.”

GEOSPREAD has now changed that outcome. AH Foot grows around 540 acres of combinable crops from Haywards Farm, Milborne St Andrew, Dorset. Field sizes range from six to 80 acres, and the rotation includes winter wheat, winter and spring barley, oilseed rape and winter oats. A crop of oil radish is established on over-winter stubbles for its ability to hold nitrogen, reducing the reliance on bought-in fertilisers.

“This makes it all the more important to spread what we have very wisely indeed,” she says. “And the spreader is absolutely amazing.”

Miss Foot is of course referring to the spreader’s ability to automatically manage its working width through clever section control - in 2m increments - to prevent overlaps.

“You have to see it working to believe what it is capable of,” she says. “When you are working in narrow strips, you can actually see a band of fertiliser being thrown exactly where it needs to go, and the control box maintains the correct application rate for that width.”

“You know that it is not putting fertiliser in the wrong place or over-dosing, so we are now saving money, not wasting it.” 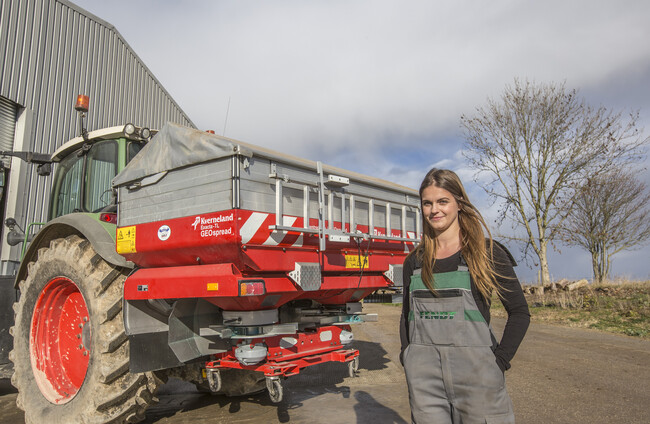 Emma Foot believes the family farm is saving money on fertiliser since switching to an Exacta-TL with GEOSPREAD.

Holding four, 600kg bags, the Exacta-TL has capacity in hand, though Miss Foot says that spreading speeds are kept to around 12kph, working on 24m tramlines. The farm chose storage wheels with the spreader too, making it easy to move the machine when stored, and simplifying hitching on and off without having to use a pallet.

Miss Foot has also applied slug pellets through the spreader too, making the most of its accuracy.

“There’s no need to fly up and down tramlines,” she adds. “This gives the spreader time to react to make sure we achieve the most accurate spread possible.”

While the spreader is mostly through an IsoMatch Tellus dual screen terminal, Miss Foot has plugged the machine directly into the ISOBUS socket on her Fendt 724.

“It is plug and play, and does exactly what we ask of it,” she says. “I’ve also used the spreading charts app on my iPhone and it works brilliantly too.”

“As with any new system, there was much to learn, though we’ve had great backup from Kverneland and our local dealer, GCS,” she says. “It is so accurate, that I wouldn’t want to spread fertiliser any other way.”