Looking for a cultivator to replace a second pass with traditional disc harrows, Derbyshire farmers WJ Blagg and Son at the 323ha Highwood Farm near Worksop, turned to the Qualidisc.

“Our stony ground has a shallow layer of topsoil, which makes seedbed preparation a challenge,” he says. “While a set of disc harrows are a good way to start the seedbed preparation process, our soils need a lighter second pass after a couple of days to help further incorporate and chop stubbles, ahead of drilling,” says David Blagg.

Equipped with two rows of 12, individually sprung discs, the Qualidisc is a compact disc harrow designed for shallow working. The rigid-mounted 3m model bought by the Blaggs arrived as part of a demonstration programme by their local dealer. 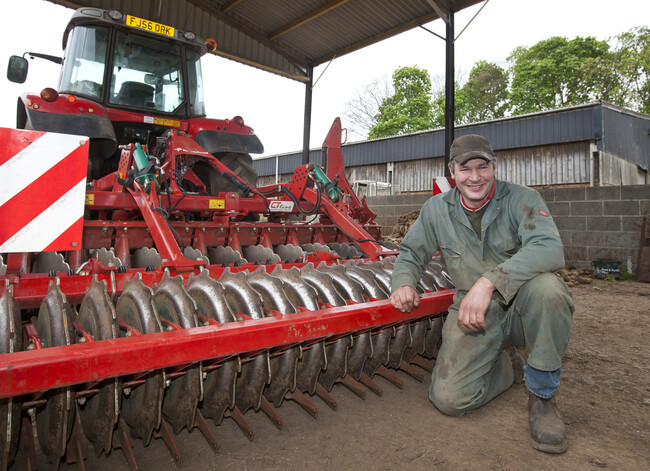 Now in its second season, Chris Blagg and his sons David and Andrew, say they were so impressed by its performance that the cultivator had to stay on the farm.

“The individually sprung discs help each element to move about, which gives a consistent working depth when dealing with stones,” says David Blagg. “When our tandem disc harrows find larger stones, that machine tends to be lifted out of the ground which makes it less effective at cultivation.”

“The Qualidisc is also lighter and faster than our disc harrows, which gives us more output, but without over-working our soils.”

Now in its second season with the farm, the Qualidisc’s versatility has seen it replace a power harrow, be put to work directly on top of ploughing and also direct into stubbles.

“We did try other types of cultivator but none could match the Qualidisc for quality of work done. It is a versatile cultivator.”